What does Rx mean? 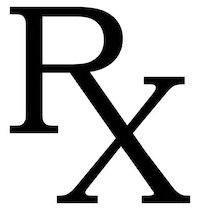 ℞ (an uppercase R with its tail crossed) is a symbol meaning prescription, used in the pharmaceutical industry for medications and drugs. It is sometimes transliterated as Rx, as traditional RX symbol cannot be represented on a typewriter keyboard. According to most sources, Rx is an abbreviation for the Latin word recipe, the imperative form of recipere, meaning “take this”, although there are a number of other theories:

First Theory: Some note its similarity to the Eye of Horus. Horus was an Egyptian god. Eye of Horus was a symbol used in ancient Egypt to ward off evil and used for good health.

Second Theory: The R part of the symbol stands for the Latin “recipe”, the imperative form of “recipere”, which means “to take” or “take this”. The X part of the symbol is derived from the symbol for the Roman God, Jupiter. It represents a prayer or invocation to Jupiter that the treatment would result in a cure, with divine help. So RX really means “take this and pray”. It goes back to ancient Roman times when people believed that if you were sick, it was because you had offended the gods and the illness was retribution.

What is the full form of Rx?

The full form of Rx is Prescription

What is the full form of Rx in Medical?

What are the full forms of Rx in Worldwide?

Find translations of Prescription
in {{translation?.name}}